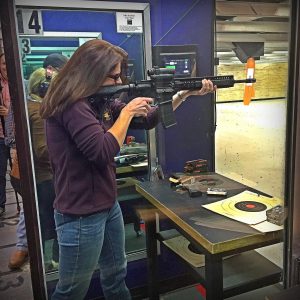 GREEN BAY, Wis. – The National Shooting Sports Foundation (NSSF) has recognized Green Bay’s Jenn Jacques as a “Local Champion” for her efforts to promote firearm safety in the region. The recognition comes as NSSF launches its fourth annual Project ChildSafe S.A.F.E. Summer campaign to emphasize the importance of responsible firearm storage – particularly while children are home from school and more likely to be unattended.

Jenn Jacques was selected for her efforts to promote firearm education and safety within her community, especially for children. As a mother, gun owner and concealed carry advocate, Jenn Jacques raises awareness through her personal blog, the Bearing Arms website, NRA News and media interviews.

“When children learn gun safety and are confident on what to do if they see a gun, they won’t be tempted to allow curiosity to place that gun in their hands. With all the firearm safety tools available to parents, we need to teach our children about gun safety while taking necessary measures to protect those who are too young to comprehend danger,” Jacques says. “I have taught my three children about firearm safety so I know firsthand how to ensure they and those around them remain safe.”

“S.A.F.E.” serves as an acronym for Store your firearms responsibly when not in use; Always practice firearm safety; Focus on your responsibilities as a firearm owner; and Education is key to preventing accidents. The effort is focused on providing resources to help gun owners take actions and share information that will help keep their families and communities safer.

“My goal is to make more people aware of how true gun safety programs like NSSF’s Project ChildSafe can and do save lives,” says Jacques. “Project ChildSafe provides great tools for parents to use at home as children learn the rules of gun safety, including firearm safety kits, informational videos and educator resources.”

“We’re very grateful for the work of people like Jenn Jacques,” said NSSF President and CEO Steve Sanetti. “They are great examples of how the firearms-owning community is committed to safety and personal responsibility, and their work is instrumental in helping to reduce firearm accidents.”

NSSF launched Project ChildSafe in 1999 (prior to 2003 the program was called Project HomeSafe) as a nationwide initiative to promote firearms responsibility and provide safety education to all gun owners. While children are a focus, Project ChildSafe is intended to help young people and adults practice greater firearm safety as well. Through partnerships with more than 15,000 law enforcement agencies, the program has provided more than 37 million free firearm safety kits to gun owners in all 50 states and the five U.S. territories. That’s in addition to the more than 70 million free locking devices manufacturers have included with new firearms sold since 1998 and continue to do today.